The dosage advice on Tongkat Ali products made by North America-based companies is unreliable. Rest assured that normally, there will be no side effects... and no effects. Most of these companies don't want you to feel anything from the herbals they sell because they are afraid you may feel the wrong thing, and that then, they are sued out of business.

American supplement companies can live with the fact that you won't buy their products again because you found them worthless. At least, that doesn't lead to litigation. 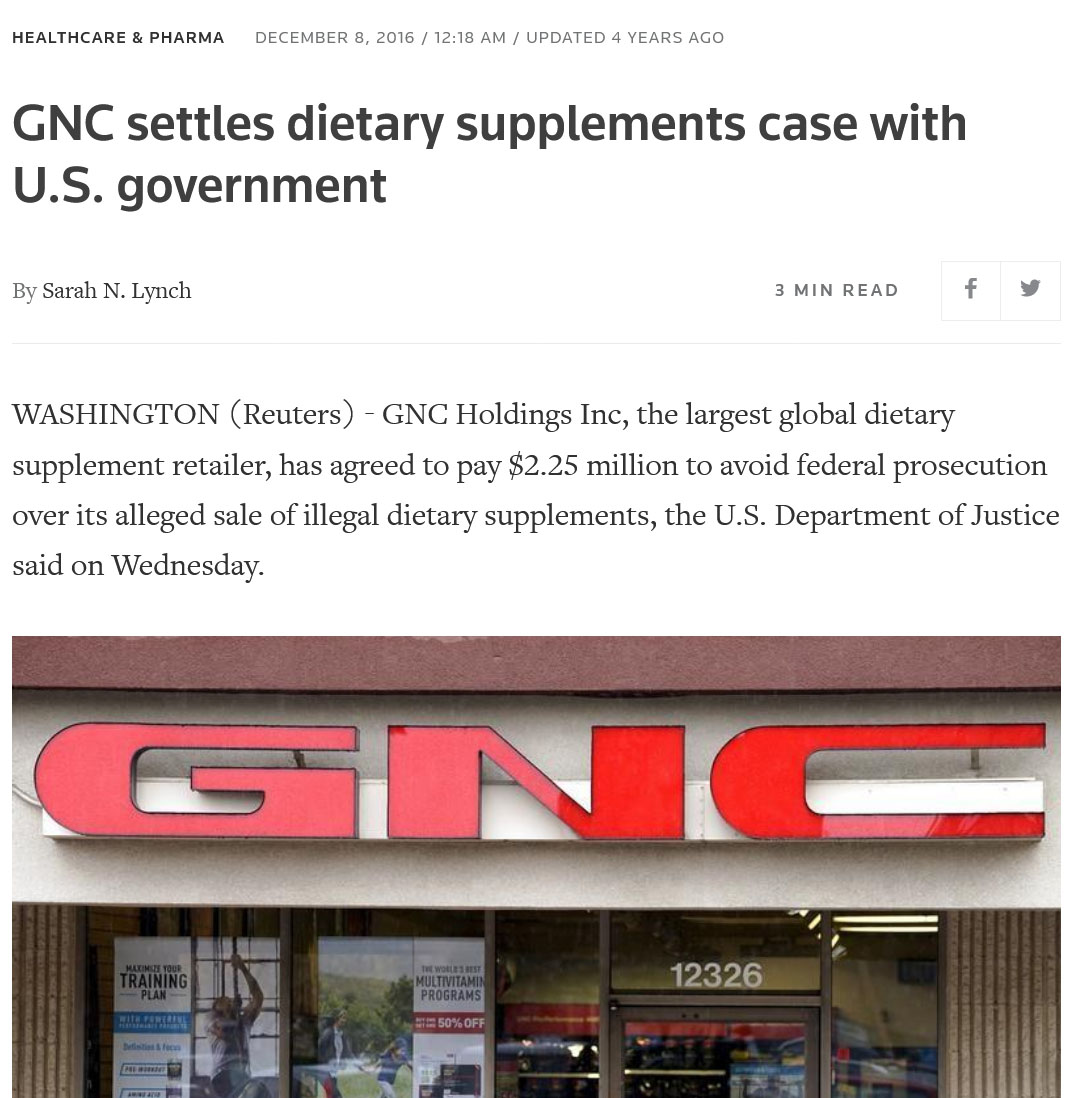 Apart from that, why should they fill expensive Tongkat Ali extract into capsules when rice flour is much cheaper, and does not come with the risk that people may feel something.

The fact that most American supplement companies sell just rice flour in capsules came to light on several occasions when The New York Times reported on the matter.

New York Times: Herbal Supplements Are Often Not What They Seem

From the perspective of American supplement companies, selling mostly rice flour in capsules is a calculable risk. At worst, they are requested to stop distribution. 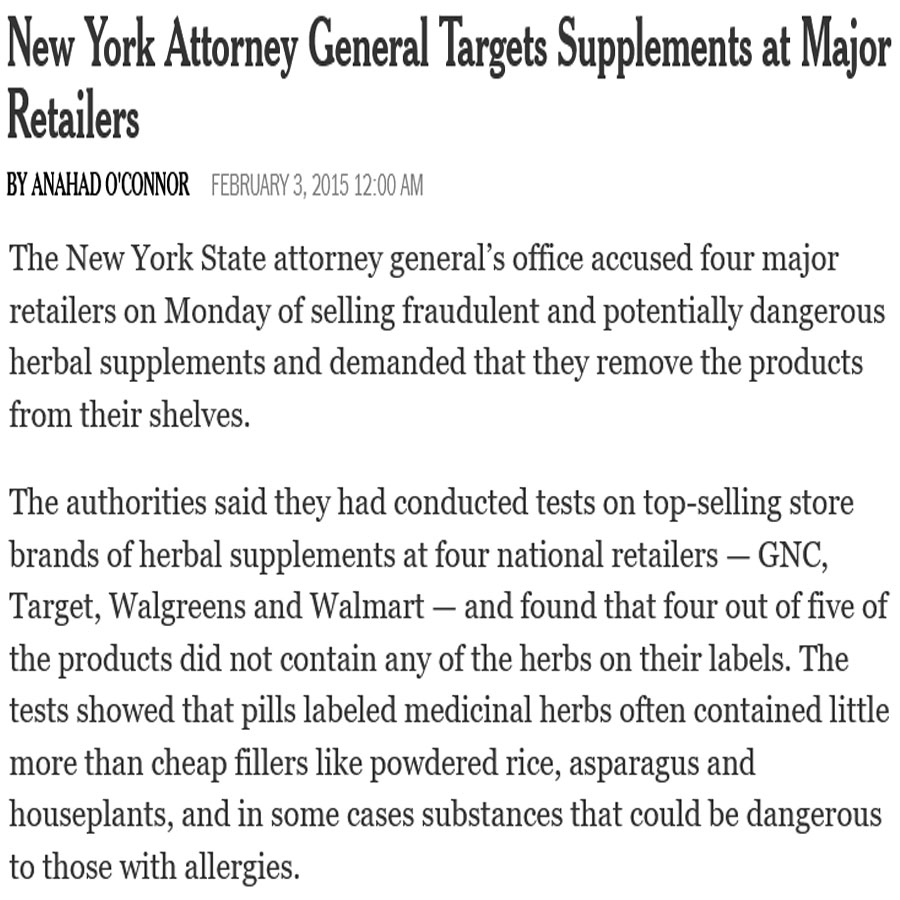 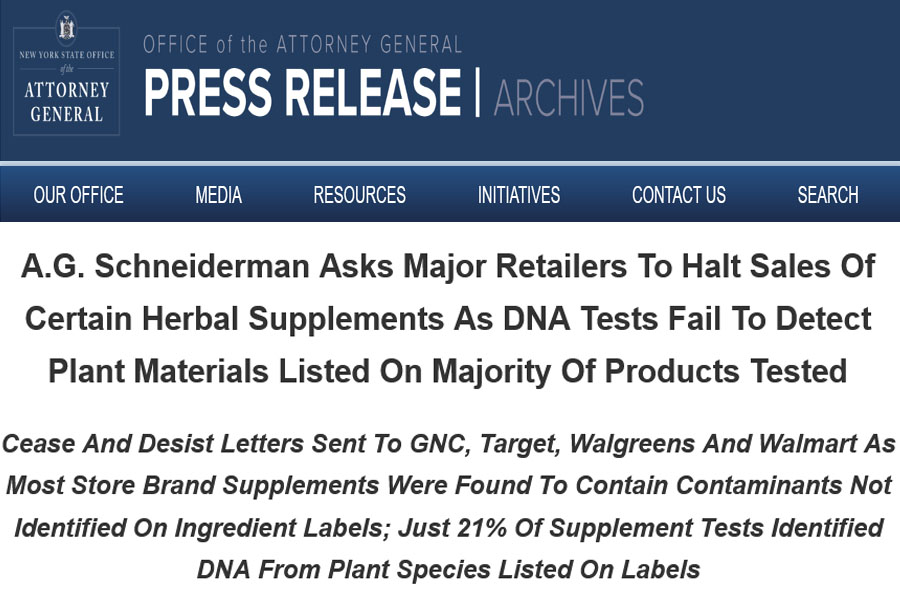 Those who do list rice flour as Other Ingredients, never quantify. Technically, rice flour could be 95 percent. 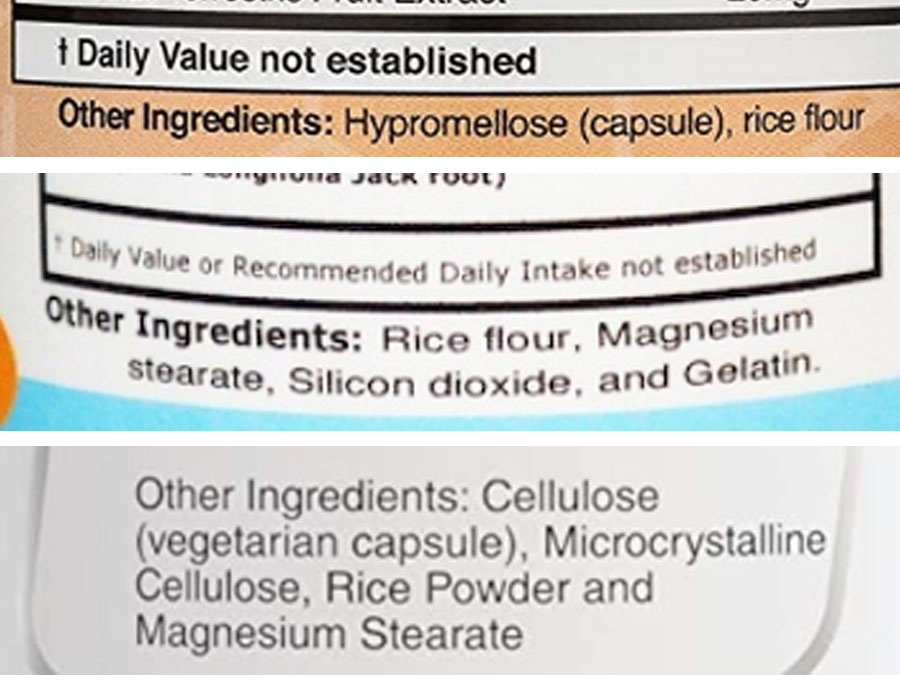 Rice flour is one way to take advantage of gullible Americans. Another is to locate a product in India. Then US law firms won't be interested to pursue the matter, and the seller can claim just about anything, such as 3450 mg of Tongkat Ali in a single capsule, even though a fully heaped teaspoon of a genuine Tongkat Ali extract has a weight of just about 1.5 grams, and standard capsules of about any product hold 300 to 700 mg. But we know it already: some people believe everything and buy any product if only it is cheap... and Amazon awards it a badge because enough people were fooled into ordering it. 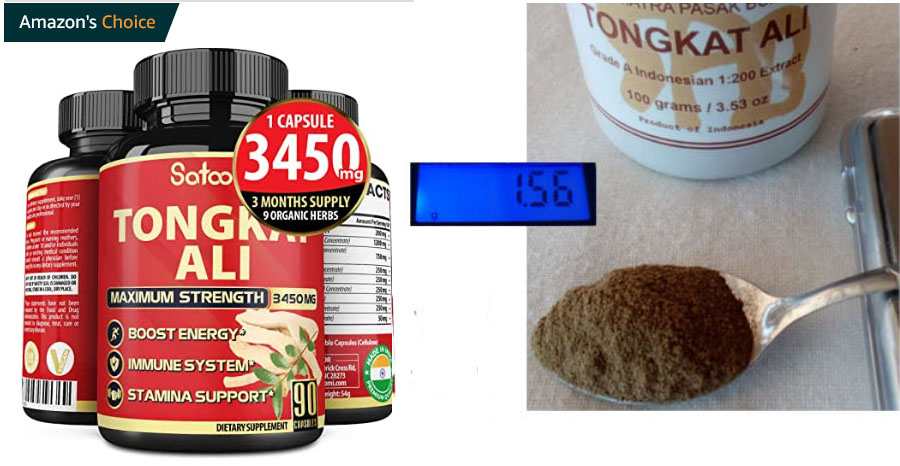 Dosage advice for products that anyway are mostly rice flour is baloney.

In 2019, the highly regarded scientific journal Evidence-Based Complementary and Alternative Medicine published a thoroughly researched article on Tongkat Ali (Eurycoma longifolia). Lead author was Shahira Ezzat, but seven more scientists worked on this comprehensive study. The standard URL for the article is: hindawi.com/journals/ecam/2019/7543460/

The article was titled: Brain Cortical and Hippocampal Dopamine: A New Mechanistic Approach for Eurycoma longifolia Well-Known Aphrodisiac Activity and Its Chemical Characterization

What does this mean? First, AEEL stands for Aqueous Extract of Eurycoma longifolia. This is what Tongkatali.org produces. An extract of Tongkat Ali root, which uses water as extraction medium. Such an extract first separates phytochemicals from the cellulose and other structural polysaccharides, which make up more than 80 percent of the dry mass of Tongkat Ali root and are of no medicinal value.

LD50 cut-off >5000 mg/kg means that even with a dosage of 5 grams per kg of bodyweight, no LD50 value could be established. For a man of 80 kilograms, the equivalent would be 400 grams of Tongkat Ali extract.

Here is the correlation between dosages and erections. As can be seen on the chart below, at dosages of 50 and 100 mg per kilogram of bodyweight, there was no improvement with erections (3 columns on the left, the first one being a control, meaning no Tongkat Ali). By far the biggest improvement was achieved at a dosage of 800 mg per kilogram of bodyweight (column furthest to the right). 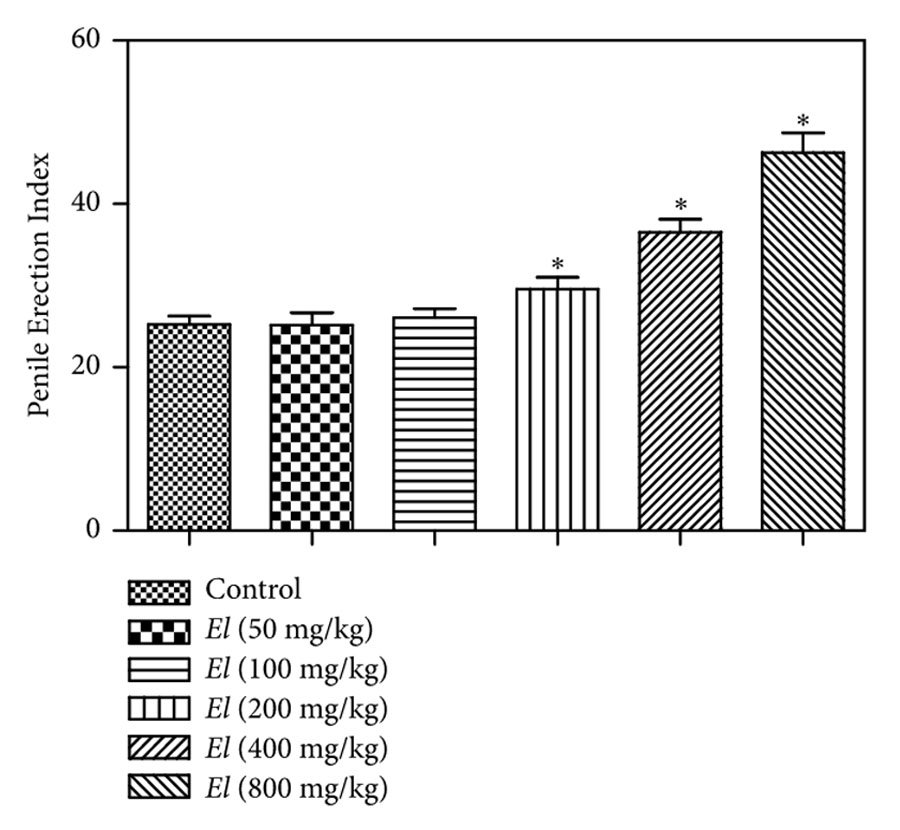 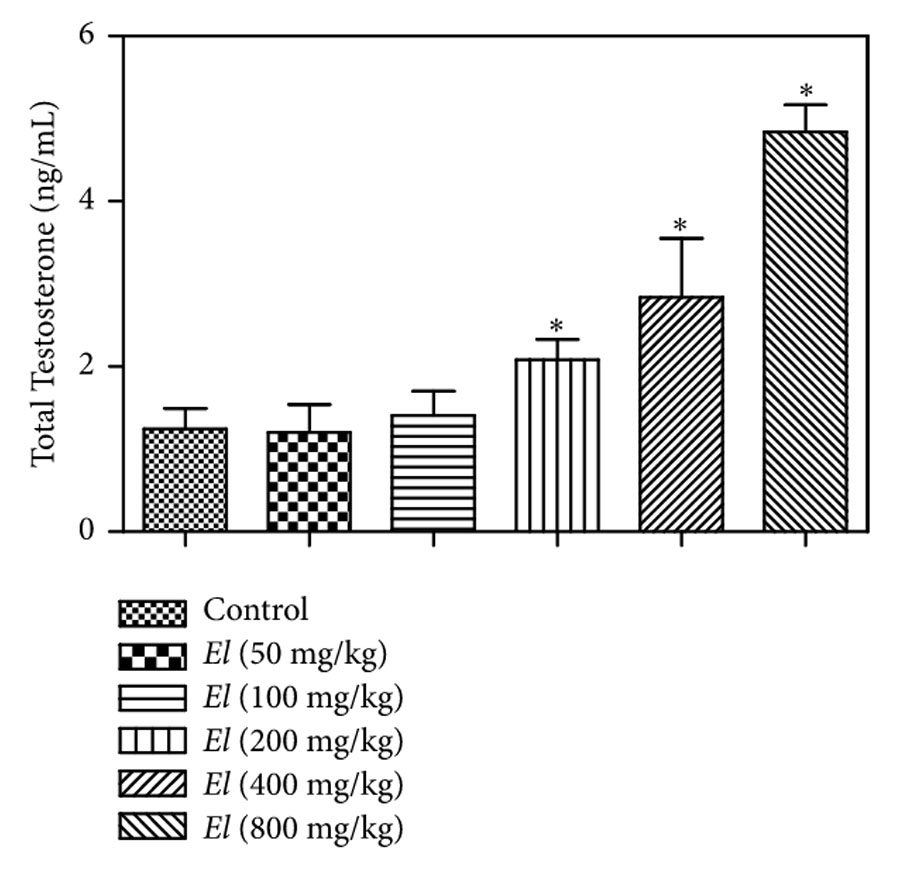 The authors, however, did not just focus on testosterone. The journal article was titled Brain Cortical and Hippocampal Dopamine: A New Mechanistic Approach for Eurycoma longifolia Well-Known Aphrodisiac Activity and Its Chemical Characterization ... the word testosterone doesn't occur in the article headline. Why? The application of testosterone by itself, or of pharmaceutical agents that exclusively raise testosterone, does not have a convincing track record when it comes to elevating libido in basically healthy men who nevertheless miss a definite sexual kick.

But other factors, including the neurotransmitter dopamine, biochemically trigger sexual interest, conduct, and pleasure. There is a clear correlation between brain dopamine and libido. And the authors indeed found that Tongkat Ali affects the brain levels of this important neurotransmitter.

Here the charts, first for dopamine in the cerebral cortex (the outer brain area involved in cognitive and analytical processes), then for the hippocampus (a deep brain area responsible for emotions): 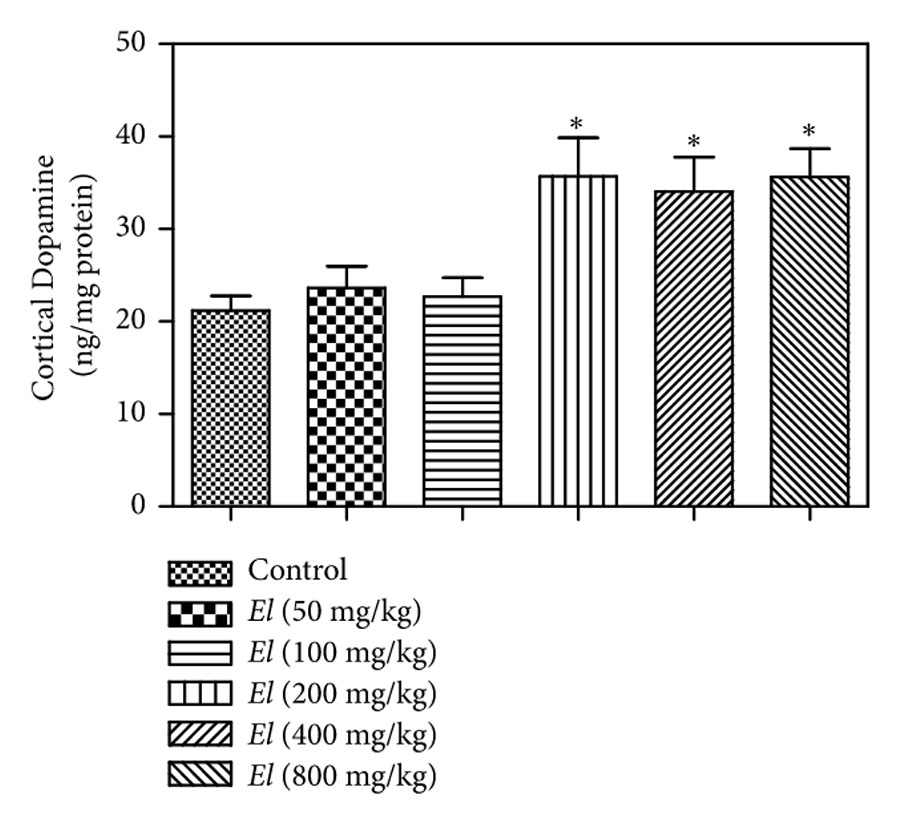 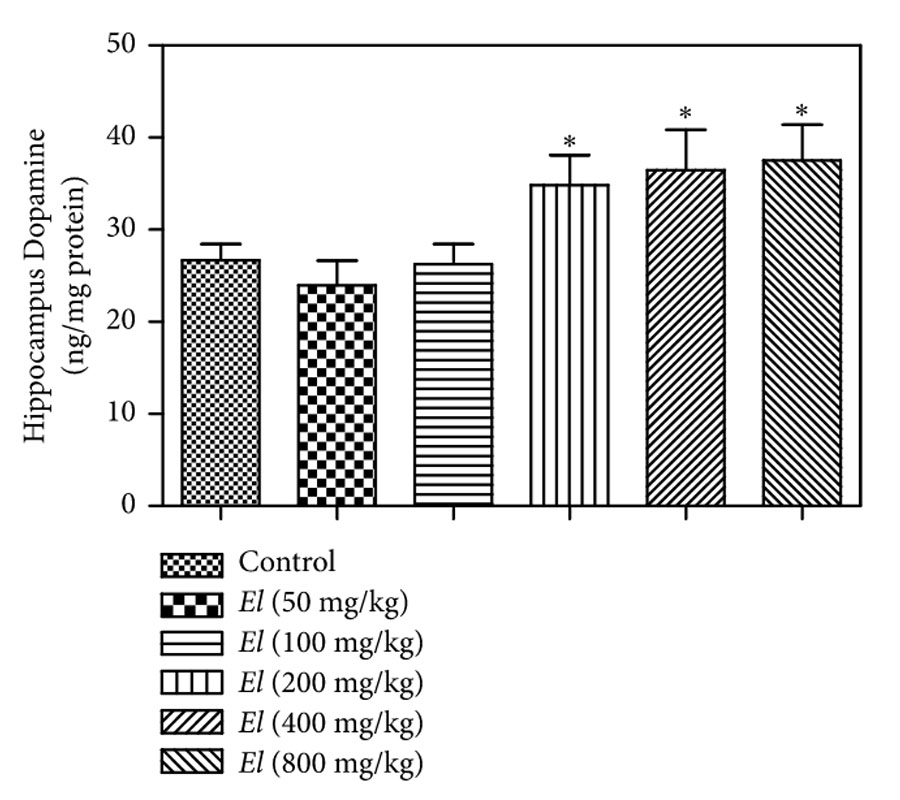 For one thing, most supplement traders know little about Tongkat Ali. They probably have never seen a root of the plant. Their background isn't herbalism, but marketing (multilevel and Internet). So, everything about their operation is designed from a marketing perspective. They sell their products as capsules only. Capsules are easy to consume, and they radiate a sense of medical intervention, even when they are just filled with rice flour.

The dosage advice of marketing people is also optimized for sales, not for effectiveness. They reckon that many men may be willing to spend something like 50 dollars for a month's supply of a sexual enhancement product that can be consumed as capsules. Do the math: 100 caps per month, so 3 to 4 caps a day... voilà, that is the dosage they arrive at.

That has nothing to do with efficacy. Most supplements are sold with the advice of 1 or 2 capsules twice a day. A recommendation of 10 capsules twice a day would feel odd, and stop people from purchasing, even when this would be dosages with a desired effect."