Kaempferia Parviflora and Other Herbals

Our products on Amazon USA

Our products on Amazon Canada

Our products on Amazon Australia

We most certainly recommend that you read the below full article on root and bark extract before placing an order, but for those who have read the article previously, and come back to our site to place an order, the order information is included here, above the article.

The root and bark extract is the only tongkat ali extract which we sell through tongkatali.org in quantities of less than 100 capsules. This is possible because the root and bark extract is effective from the first time, one takes it. Other tongkat ali extracts, especially root-only extract, have to be consumed for some time so that the testosterone increase will make a difference to sexual intercourse.

Unfortunately, tongkat ali has now been banned in many countries. Many governments apparently are afraid, the herbal could turn ordinary family fathers into sex maniacs. Thus, for many countries, anything labeled as tongkat ali may be confiscated or returned to the sender by customs. The US is the easiest country to ship to, but the USPS is not reliable in updating tracking information.

Many other parts of the world are more complicated, and to some corners, there no longer are postal services because of Covid restrictions. We ship worldwide, but because of the myriad of regional and local limitations, we do not have automated order buttons. If you wish to order, please contact us through the email address in the page header. We will then reply with an order link, or equivalent information. 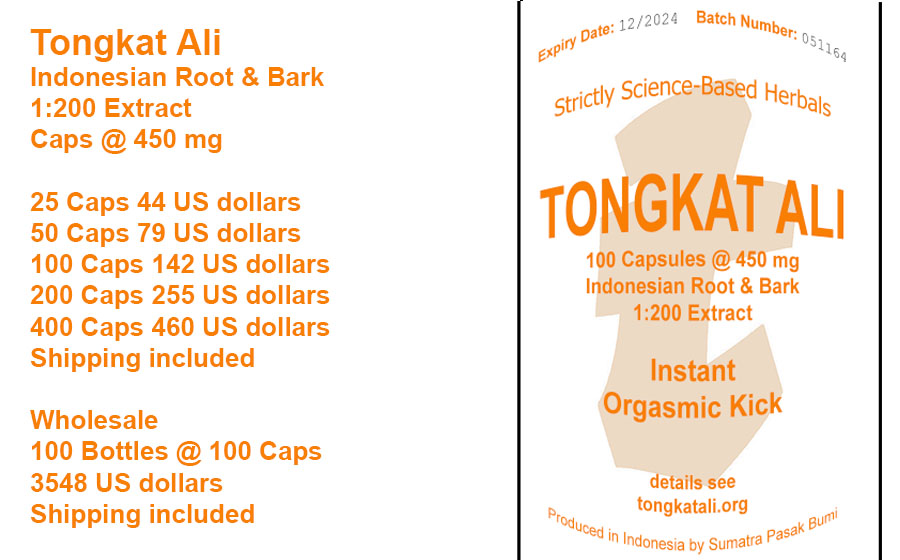 Ordering larger quantities is more economical than the purchase of small amounts. Retail buyers with an order history of more than 1000 US dollars receive free double quantity.

Of all achievements in your life, sexual health reigns supreme.

You may become rich, or famous, or a hero saving mankind, or your fatherland. The latter may earn you a bronze statue (you'll never see), and wreaths on National Days.

But as achievements, all these are of less value to your personal life than optimal sexual health which allows you the joy of overwhelming orgasms, every day, up to an old age.

Depending on your religious orientation, you may even assume that the better your sex in this life, the more karma you accumulate for your next, or even your eternal life.

Sexual pleasure is the essence of life, more so than other constructs that aim to give meaning to the human existence, such as philosophy and (other) religions. If you can experience orgasmic pleasure to the full extent, and in series every day, you know that it's good to be alive, not because you would understand pseudo-logical metaphysical systems, but because you feel it. And that is all it takes.

All phases of sexual conduct, from desire through arousal to relief depend on a complex interplay of many hormones and neurotransmitters, which changes in composition every few milliseconds as you move along from sexual interest to an orgasm, or several in a row.

It helps if you have a basic understanding of the biochemistry of the human mind. The human brain does not have a hard disc where knowledge and memories would be stored, awaiting retrieval. Rather, every thought and every memory are caused by specific chemical compositions in the synapses between the nerve cells (neurons) in various parts of the brain. Thus, when you remember something, the neurons at various parts of your brain release neurotransmitters and other chemical factors in certain proportions into the synapses, and when a memory is recalled for a span of time, this is just biochemical compositions in synapses in a constant flux.

There are routine patterns to the release and uptake of neurotransmitters and other factors in synapses, which represents the fact that something has been learned and remembered. But when the mind wanders to another topic, a knowledge or memory isn't stored somewhere like information is stored on a computer hard disc. Something that isn't remembered at this moment is simply not there.

In the human mind, and in human emotion, nothing is digital. Everything is analog, which means: an approximation. Furthermore, all the neurotransmitters and other factors that determine a routine memory or the journey through a string of sexual emotions from sexual interest through to orgasmic release depend on the availability of chemical building blocks, ultimately supplied by nutrition.

Nothing, absolutely nothing in the chemistry of our sexuality depends on just one factor, like, for example, testosterone. In endocrinology and neurology, that would be a prehistoric view. If anything, over-supplying just one component in the delicate mix will throw you off balance.

Excitement without an ability to function (cocaine, amphetamines). Erections that are out of tune with excitement (Viagra). Arousal (maybe) accompanied by nausea (dopaminergic drugs). Erections and a sense of a pending heart attack (yohimbe and yohimbine).

Most other pharmaceuticals just diminish sexuality. And even those that seem to help somewhat (like phosphodiesterase inhibitors) can do many things, but they won't give you back the sexual pleasure that you experienced in your late teens or early twenties.

Tongkat ali is still your best bet. This herb works as a sexual adaptogen. It balances the many factors that play a role in sexual enjoyment. Think of the sexual act as a symphony. There may be a hundred instruments in the concert.

Tongkat ali helps the conductor to avoid that certain hormones or neurotransmitters play out of tune, or miss their parts. The conductor, quite possibly the hypothalamus (a very old part of the brain), is in charge of the harmony of many different sounds that make a musical performance a pleasure to hear.

The most inspiring tongkat ali extract combines the root of the plant with the bark. This extract is only available from Tongkatali.org, the website of the Sumatra Pasak Bumi, the world's foremost tongkat ali company since the mid 1990's.

There are several dozens of phytochemicals (plant chemicals) that are unique to tongkat ali. All of these chemicals are distributed throughout the plant, though in different concentrations and ratios. The bark of tongkat ali trees is especially rich in sexuality-enhancing alkaloids, specifically canthin-6-one alkaloids [Source: Canthin-6-one alkaloids from Eurycoma longifolia].

The canthin-6-one alkaloids from tongkat ali tree bark are related to tryptamine, a biogenic amine that is involved in dopamine control.

An extract of tongkat ali root and bark anchors in a very specific point in the biochemical flux that determines, from second to second, a person's emotional state during sexual intercourse. It will kick in during the plateau phase, the period of time when arousal has reached a level that, in sexually healthy individuals, makes an orgasm a certainty. Many older men, however, experience a sexual disturbance in which they just can't reach. They can experience an erection (possibly Viagra-aided), and can get excited, but no longer arrive at a point of shaking when they want orgasmic release, whatever the circumstance. It is the neurochemistry of this specific event that is enhanced by the root and bark extract, and for an older man with suboptimal sexual health, this makes the difference between satisfaction and frustration.

But not just this. The neuronal biochemistry, as it is moderated by this specific tongkat ali extract, helps with decoupling orgasms from ejaculations, making multiple male orgasms a distinct possibility.

Orgasm and ejaculation are NOT the same. One can experience orgasms without ejaculations (which means: without prostate contractions). In such orgasms, the various fluids that constitute semen are still released from the seminal vesicles, the bulbourethral glands, the prostate, and the epididymides (which store sperm), and this release of semen sends orgasmic waves through the body, but the smooth muscles of the prostate do not forcefully contract, so semen is not expelled. It just flows out of the tip of the penis, though not as immediate as during an ejaculation.

To avoid the ejaculation while riding on orgasmic waves, time during orgasm must pass in slow motion, and this is exactly what the root and bark extract can help with.

Are semen-discharging but non-ejaculatory orgasms better than the ejaculatory standard fare? I definitely think so. I actually dislike the profound emotional drop, caused by the prolactin surge effected by prostate muscle contraction. Slow-discharge orgasms feel better in that even their tail end is a pleasure, and one can have ten such orgasms in a row over 15 to 30 minutes... sheer bliss. And even after the tenth, the refractory period may just be a few hours. But after full prostate contractions, with prolactin flooding the system, it may be days before a man is back on a level on which he was before an ejaculation. Read the world's foremost scientific journal, Nature, on the avoidance of prolactin flooding, and the resulting capability for multiple male orgasms: Absence of orgasm-induced prolactin secretion in a healthy multi-orgasmic male subject

Nothing is further from the truth. Ejaculatory control is not about fewer orgasms, it's about five to ten orgasms every day, as opposed to one a week, when coupled with a full ejaculation. It's not primarily the orgasm that in men causes that shitty prolactin surge, it's the prostate muscle contractions. In order to be multi-orgasmic, one just has to control the smooth muscle cells of the prostate... or use tongkat ali root and bark extract to achieve the feat.

The neurons that enervate the prostate are also involved in pelvic floor muscle contractions (which, apart from other things, control the anus during defecation). On a good plateau phase, the anus will be contracted, the follicles of hair, especially in the lower back, will contract and make hair standing up, limb muscles will stiffen, and, of course, there will be an increased heart rate, even some pulmonary restriction (resulting in breathlessness upon relaxation).

Of the various tongkat ali extracts available from Tongkatali.org, the root and bark extract is the one with the shortest onset of effects. Often, this extract will even have an instant effect, from the first time it is used.

Standard dosages as printed on the bottles would be 4 to 8 capsules of 450 mg twice a day. But some people are more sensitive than others, and achieve good effects on lower dosages, while others may need top-of-the-range dosages. While the whole tongkat ali plant has dopaminergic effects, they are more pronounced with extracts that contain bark as well as root. An overly generous dosage, such as 30 capsules within an hour, may have typical dopaminergic symptoms such as nausea, and possibly elevated body temperature. On the other hand, dosages in the lower normal stratum may have too little effect to make a difference.